It swept down the mountain and attacked several houses. Kali's dome amazingly shrugged off the fire. An imperterbable being in the forest. 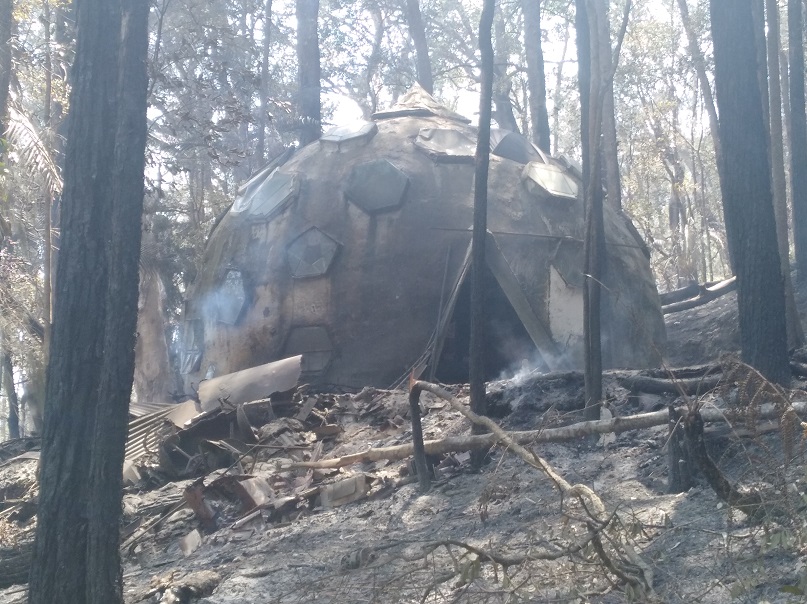 James is riding from Melbourne to Canberra, touring their actual Nobel Peace Medal to raise awareness of the new UN Treaty on the Proliferation of Nuclear Weapons. details

Pacific National, as part of their restructuring, called for a provider to allow their 'Train Storage Facility' at Greta to be controlled from a remote location. The work was granted to 4Tel, which is also the signalling provider to John Holland for the Central West Area of NSW.

Flowtrack has been in a partnership with 4Tel for over 7 years to provide a RVDS (Rail Vehicle Detection System) so that 4Tel has a full set of offerings to cover all rail needs. Up until now, 4Tel has been unsuccessful at getting work to install this system, even though it is far cheaper and in many ways far more capable than offerings by the big players.

This is a satisfying continuation of the software lineage that traces back to the first mouse controlled signalling system in NSW (1993) and remained in use for 16 years runnng the Junee/Albury CTC.

Much work has been done by James this month on an Arduino application. Both the hardware and the software has been added to in order to do a "brain transplant" on a coffee roasting machine for Mountaintop Plantation. The breadboard is below. 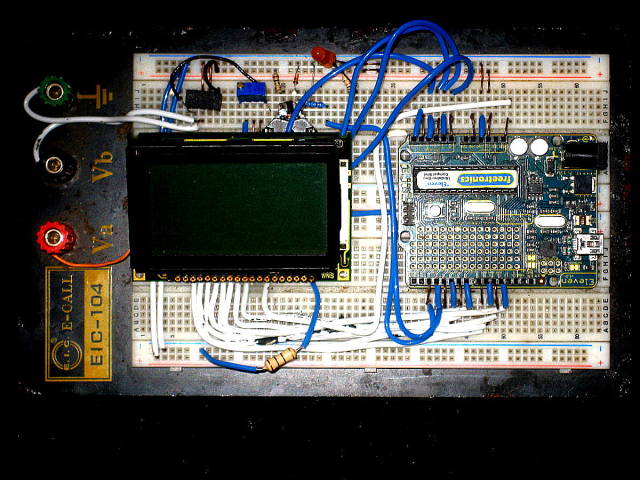 Compared to the previous controller the Arduino is able to connect to more sensors, controls and to offer communication and screen driving. Components were stacked in order to provide I squared C interface, connections to grey coded pots and voltage supplies to the LCD. 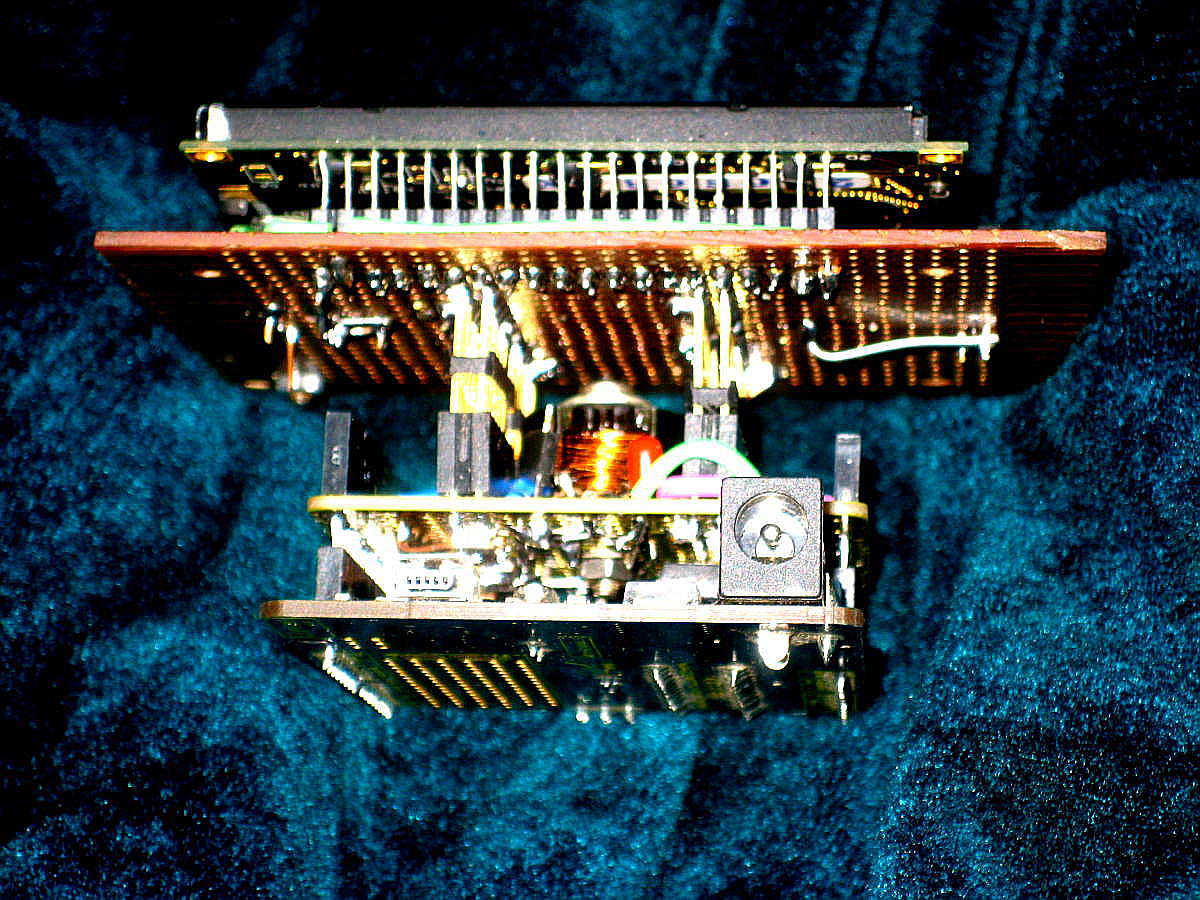 Above is the prototype stage with the boards stacked. Open source software for the Arduino was helpful in getting a good screen layout.(Open GLCD Library)

Kali had a senior moment last week and left a bag containing Flowtrack credit card, cash, keys and documents in a SUBWAY sandwich shop at Thrumster (Port Macquarie interchange). She was obviously distracted eating a 6" and did not discover the error till Coffs when cleaning up the car.

Amazingly helpful staff at the BP roadhouse franchise rang south and got the bag posted free of charge back to Nimbin where it duly arrived! So please go to SUBWAY and give them good feedback. Their food is good too.


4Tel have opened a new facility near Newcastle University

James and Kali went to the event and were impressed at the scope of the project. Obviously expansion is anticipated. Derrel the CEO in his speech said as much. The minister for Bega led the ceremonies and the tone was stressed that this was an export oriented company. 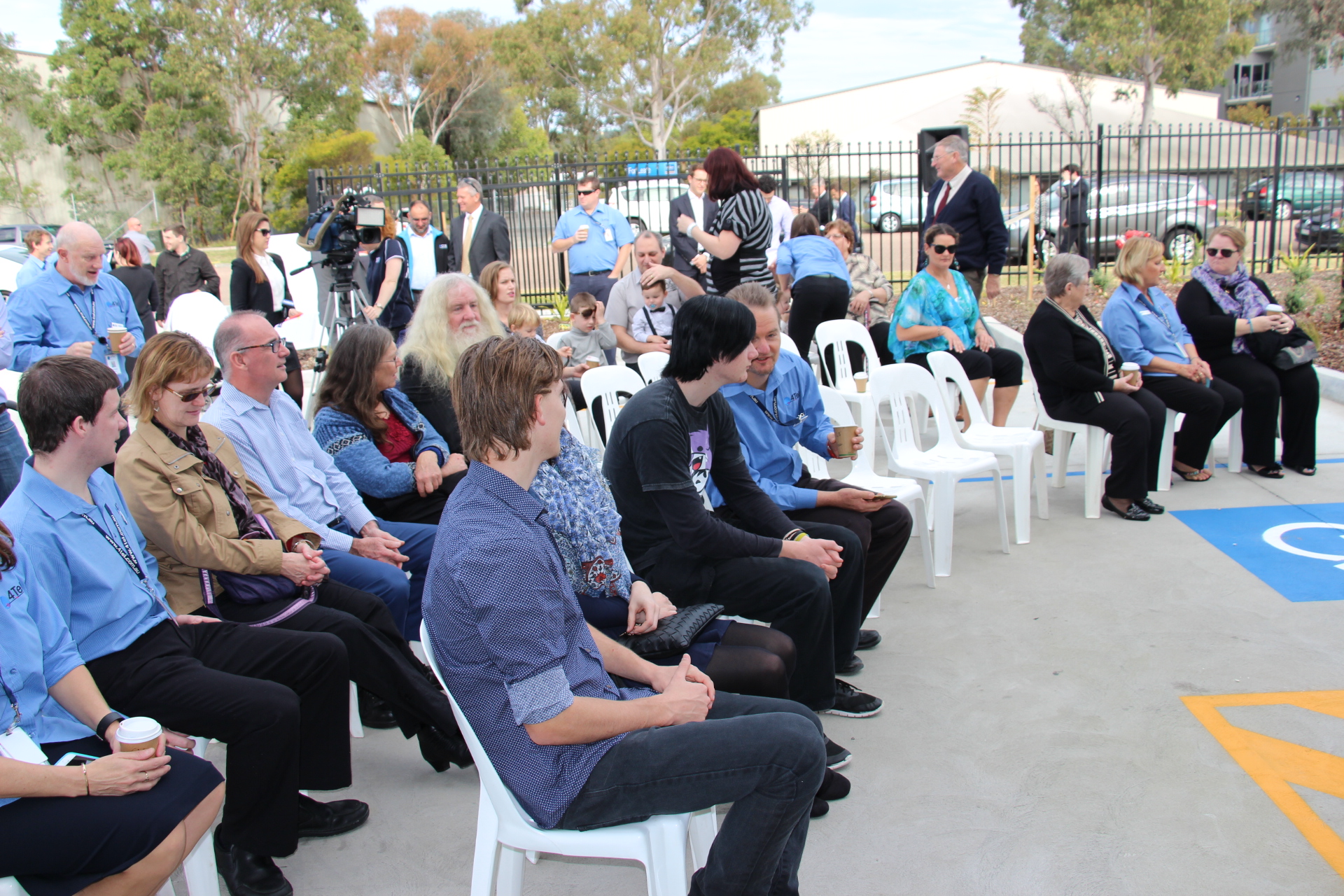 The nice, clear, graphics the company have been providing even extended to the cake which was toppped by a printed ricepaper programme!

We were approached by UGL in August to assist keeping aged JZA telemetry systems going for the Melbourne rail system. We have experience in the manchester encoded sychronous stream telemetry used by this system, having twice interfaced to it in the past.
The new proposal was best shown to be effective by doing some of the work - which ended up in the whole system being built using open-sourced hardware and very simple interface cards. It was not however a simple translation system as the JZA system has timing requirements that cannot be simply met. We have previously created buffering systems and they were applied to form a solution for this task.

Unfortunately, UGL sacked the person we were dealing with, and the others involved refuse to answer our communications. So, if anyone out there requires interface from any telemetry protocol to JZA 711 or 715 systems, we have the solution for you.

2014 was a messy year but activity is now increasing with lots of repairs and alterations and completions of unfinished work. Rainbow Power Company have assigned hydro enquiries to us, and there have been solid proposals, as well as annoying ones by people who think marketing trumps physics. It is so shocking to have to quote high school physics formulae and then be called brainwashed by science!
Our release of open source software met with deafening silence! The only interest came from the very inferior Windows version of "schematic". Apparently we are behind the wave in supporting Schedit which is too old. At least we have had good in-house use of Schematux in printing out our old circuit diagrams.
Distractions have been many. Sick cows near the workshop demanded attention. Kali has needed to build a new shed to house hoarded junk such as a vacuum tube collection. James has swapped most of the essential organs of his Alfa 90. Roger has been harried by customers needing repairs done and by virtuous organisations like the school needing banking help. Ian Dixon made a short film about Rainers Nitelite under encouragement by Openabc.

Our software for the last ten years has used the graphical widgets supplied by the Borland Libraries. We became known in Lismore as the people who actually bought Borland 6 - not cheap! Customers all wanted to use Windows so that was all well.
But learning to use Qt creator and to compile programs in Linux would extend our opportunities. A good test project was to rewrite our SCHEDIT viewer in a form where it can be released as GPL and make a contribution to the wonderful open source community. (and make Kali happy)
We have just put it on our downloads page as an unfinished alpha stage and we have not yet worked out all the dependencies, but the program runs and handles enormous diagrams with virtual windowing and excellent zoom and colour/font/line options.

We had been making low speed pelton wheel generators from local magnets in an inelegant kludgy manner and several attempts to find a curved magnet had failed. Eventually a reply to an email from China had us sending the requirement off to an unknown supplier who actually replied! Many other enquiries had led to nothing. We sent the sketch: 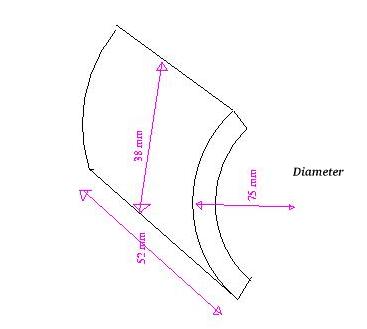 They actually made such devices and shipped them to us. They turned up in a nice flux shieled box and even magnetised North and South. the source was http://www.king-ndmagnet.com, contact Evening0405@163.com. We were amazed that the dimensions and every other detail was as we had wished.

The headlight battery on the Giant bicycle James rides had become very old and its heavy lead battery had actually broken. After much discussion we decided to get to know more about Lithium Ion batteries. Our neighbour has been using them in a radio controlled model plane, but they have been exploding occasionally... So we got a 2.5 amp hour 16 volt unit and adapted it to the purpose. The case looks suspiciously like a pipe bomb, but was goodto strap alonside the steering bearings, adding beneficial front weight to the mnountain bike. 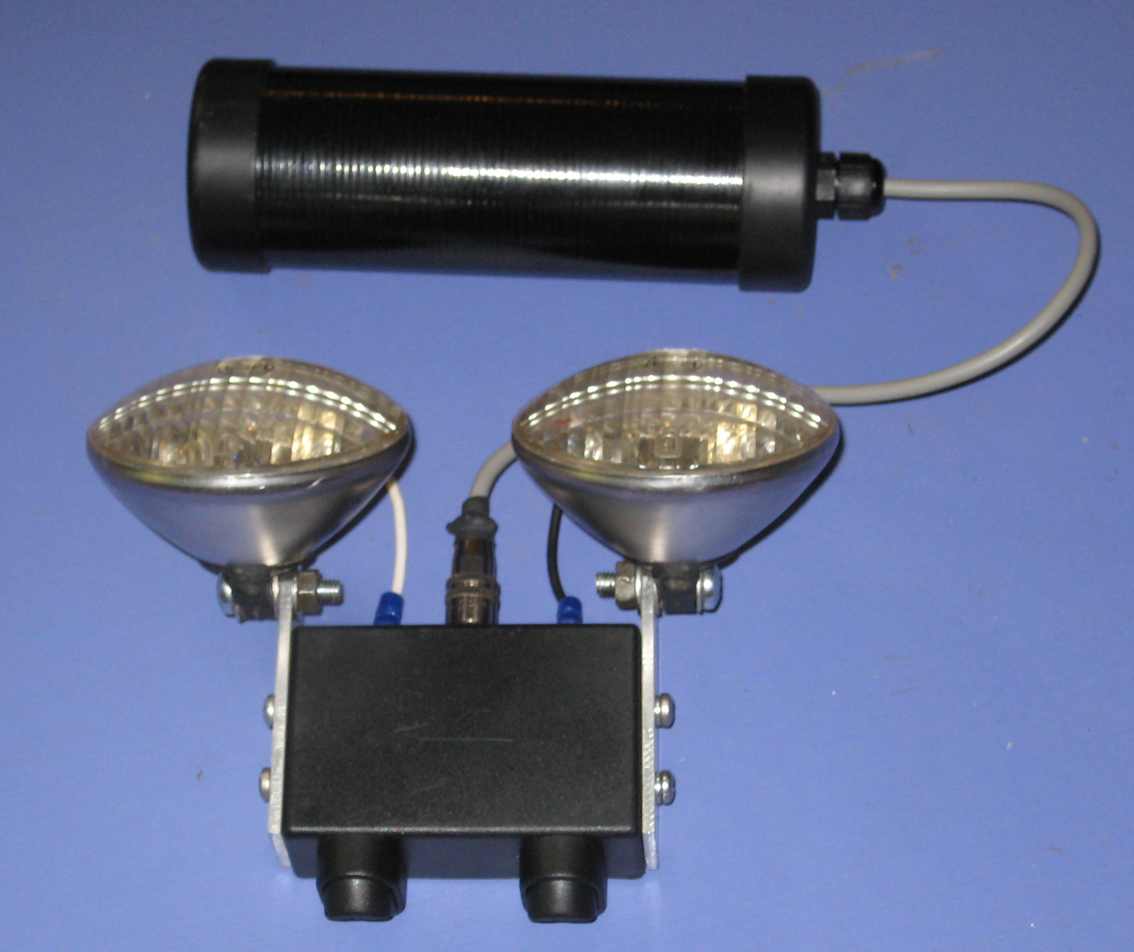 To run the 6 volt bulbs a switching regulator was needed, implemented with a FET running at 3 KHz and 16% duty cycle. We were surprised to find the internal impedance of the litium cell is an order of magnitude higher than the lead cell and a current levelling choke might be advantageous in future designs. 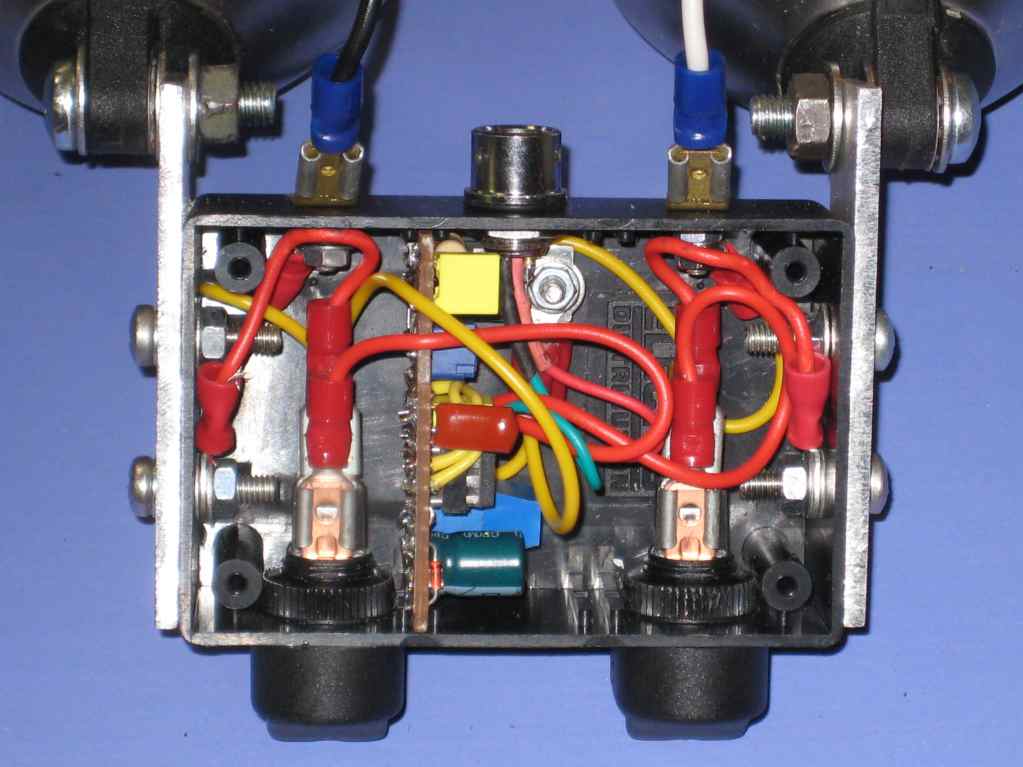 Well, not the mountain, but our long time customers house on it. A much photographed work of masonry in the Gaudi style has been demolished. Its main crime, apart from leaking, was to inhabit million dollar real estate on Dorrigo plateau. Only just on the plateau; if you rolled over in bed there was the horrible sensation that you were about to fall 1000 metres into Thora! The flowtrack connection was the major work of keeping the micro-hydro system running in the face of extreme lightning attack. The generator controller ended up with no electronics except for six oversized rectifiers. Its heat dump was incorporated in the masonry of the building! A removeable plug took the transmission line to a hook on the other side of the front door, but a strike then went from pillar to pillar, leaving a hole in the side of the controller box. Now the electrical system is running on a much less valuable property the other side of Dorrigo. Meanwhile the dome Kali built thirty five years ago has just been rescued from self destruction with a copious application of scraper and zinc filled paint. It does not have to suffer the indignity of being worth less than its site as it sits where nobody wants to build on land that can't be sold.

Our fifteen year old train control system at Junee at last fell to a Phoenix system after an exemplary record. But more work was needed at Muswellbrook where the aging S2 telemetry had become unmaintainable. The "Rabbit" based boards made by Kilgour Electronics (NKA & Associates) were installed at thirteen stations to Werris Ck and their data was transmitted to ARTC's NCCN (Newcastle Train Control) centre. Enabling software was written by James. Features of this package included field logs of train movements stored efficiently in the Rabbit modules. We have hopes of finding other neglected S2 telemetry racks in other corners of the globe.

The Venus Bay machine was not starting so Kali eventually mounted a repair mission. Yes, the smoke had escaped from the 3 phase transformer, but not just one phase, two! This was a problem as only one had been lugged over the desert in poor old GKN700.

There were efforts to post one from Nimbin, but it was Easter and there were various other holdups. So in between several PV system upgrades Kali had a go at the Peter Freere kludge and got the machine running with this circuit 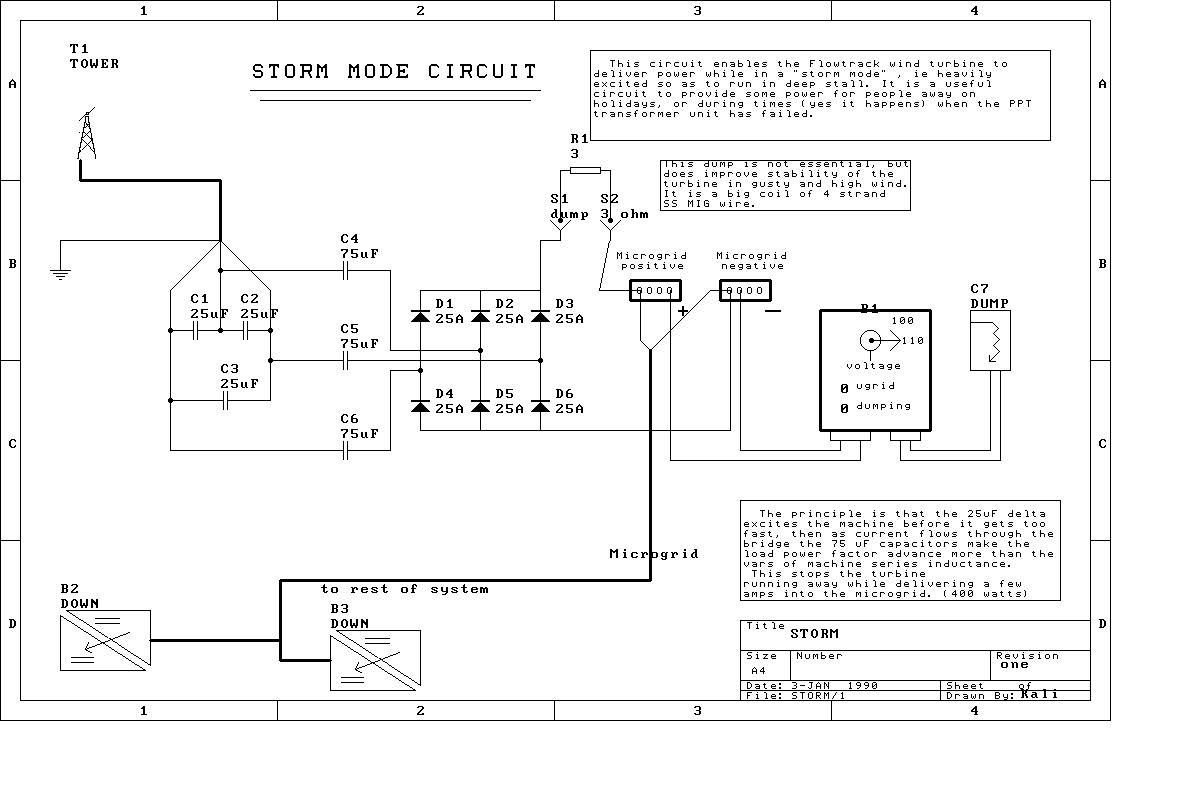 This got the machine running to 500 watts, enough to carry the system along with the extra PV, and all the heavy bits were brought back to Nimbin through the sandstorm,

At Newcastle a spring gave way and the price of steel has cleared the wreckers yards:-( Thankfully Newcastle is a place where you can get springs made for a reasonable price and quickly.

We had to try out this thing! Everybody criticises its design, but for different reasons. They all focus on their own forte....

Well it eventally arrived with all the wires in the controller broken off, and a joke of a stub tower, and no obvious way of stopping the wires twisting up. BUT it seemed adequately solid and conventional in design so Kali made a 10 metre tower out of square Duragal with a Barret truss in the middle and John has taken it to Dingo Ridge to erect this weekend, yes in the continuous rain.

Check out this turbine here.

And the circuit diagram they should supply of the controller ... 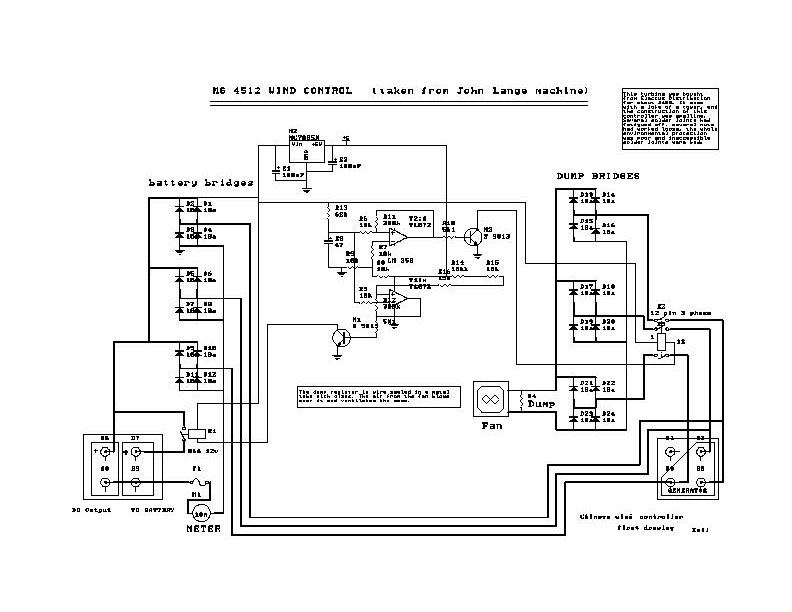 After all the wonderful performance of the Rabbit modules we went through some other data taking options. Rainer has been sceptical of the posted efficiency figures of several refrigerators (too high!) and we need a test rig to leave running.

So we got out the Protek506 and the Digitech 1538 and the Australian DSOA by Tronnort Technology and tried to make current computers and operating systems talk to them. There were many nasty tricks. We wrote a minimal program for running the Protek from Linux and found a quite good one for running the Digitech.

Here they are: source code Protek506