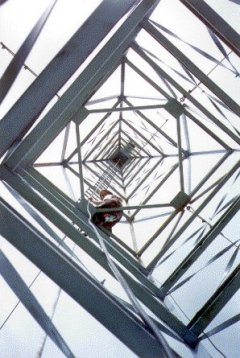 This machine has high speed, hard stall blades which behave in some surprising ways. Until the blade tips get to about seven times the wind speed they get very little grip on the air. When the blades do get fast enough to grip the air there is a sudden acceleration. If the electrical system is working correctly then the speed of the machine will be controlled by the braking effect of the generator. If for any reason the generator does not do this there is an automatic brake which is actuated at the somewhat alarming speed of 300 rpm. There will be a bang and a short screeching sound as the machine is halted in about two revolutions. The brake can be manually reset by pulling downward firmly on the conduit of the power cable which runs down the tower. The force required is about 30 Kg. When reset has been accomplished the force required to pull down the cable is about half this amount and the feel is springy rather than stiff.

This turbine is capable of good charge rates in very light winds. When winds are light and steady there often exists the situation where the machine turns around idly and will not start. To manually start the machine (or to test it if there is no wind) there is a device with a male three pin plug on one end and a female four pin plug on the other. If a generator set (or large inverter) is connected to one end of this device and the wind turbine to the other, the turbine will accelerate, slowly at first and then rather quickly if there is wind. When sufficient speed has been achieved (100 rpm) the 240 volt source can be switched off and the plug from the wind machine can be taken out of the starter and plugged into the control box, and generation should commence.

The generator is simply a three phase induction motor which is run as a generator by the control box which is connected to it, possibly by quite a long transmission cable. It will be found that the end of the transmission cable has a four pin plug on it, apparently the wrong way around. Remember that the generator is simply an electric motor and can generate no significant voltage unless it is attached to the control box. This also means that unless plugged in the generator cannot stop the machine running away and tripping the brake. This can happen in seconds as the blades are quite light. An alternative box is provided to plug the generator into, the so called "storm load", which functions as a park mode for the machine. The machine is not actually held stationary, but prevented from exceeding 30 rpm. In this state the machine can ride out a gale with minimum stress. Also, if the machine is not in use, this is a good way to leave it as it keeps the bearings lubricated and avoids the problem of the brake seizing up in one position.

A five kilowatt, three phase transformer/rectifier converts the output of the generator to either 100v nominal DC, or 48v nominal DC according to the way its taps are connected. This power may be led straight to a storage battery, or into some other DC network. There must be a load connected to the output of the transformer when it is run, or else the voltage will rise to damaging levels. There may be a "crowbar" circuit to prevent this eventuality and this will de-excite the generator causing the machine to run away and the brake to act. The transformer must be in a dry, clean, ventilated area as it becomes quite warm when running at full power.

Between the turbine and the generator is a speed increasing gearbox with ratio 1:8. It consists of two stages of helical gears which are very efficient and quiet, made with numerically controlled grinding technology. In this application they are lightly stressed and will have a very long life span. The oil should be changed every few years and signs of water looked for. The machine does not run hot enough to drive out moisture. Only light oil should be used. Hypoid SAE is too thick and must be diluted 50% with light engine oil if a lighter gear oil cannot be found.

Over-speed, or power surplus to requirements, is prevented by the stall governor which works by loading the blades down to a speed at which they lose their grip on the air. This is done by exciting the generator too much, i.e., making the magnetic flux higher so that the generator requires more force to turn than the blades can supply. There are sixteen steps of over-excitation, indicated in binary by four lights on the controller. There are actually six lights, the first green one simply indicating voltage in the generator, and the last red one indicating the situation where the governor is doing all it can and the machine is still too fast.

The four lights in the middle should be green and flicking when the machine is running normally. As the governor begins to act they will turn orange in binary sequence according to the amount of blade slowing being implemented. If any of these lights are red then a fault is indicated in that channel. The signal from each channel is taken to removable boards which actually do the work via triacs, each of which has a small neon on them indicating their action. These orange lights should coincide with the main indicator board orange lights.

The turbine only has two blades. Apart from the higher efficiency, the reason for this is that hard stall blades are mechanically stronger if designed as two thicker blades rather than three thinner ones. The hard stall characteristic is important as it makes the governor work better without having the mechanical complexity and unreliability of variable pitch governors, or the gyroscopic problems of facing the machine out of the wind to control speed.

Even so, a considerable amount of blade deflection will be noticed in spite of the centrifugal stiffening which tends to straighten the blades. This is normal and is limited by the power setting of the governor.

An effect of having two blades is that when the machine is yawing (wind direction is changing) there is a shudder at double blade frequency which is unnerving. It is called hub nodding because it is in the vertical plane, and is an unavoidable effect of gyroscopic forces on two bladed machines. The effects of this have been minimised in the Flowtrack machine by:

A side effect of the small tail is that if the turntable is not level to within 5 degrees the machine may fail to face the wind. The spring in the turntable which prevents cable windup also acts to interfere with the action of the tail, but this is a much lesser effect, each windup turn only making about 5 degrees difference to the direction at startup wind speeds.

Corrosion is a much bigger problem than wear. Ball races in the generator and turntable need re-packing every five years, and the parts inside the brake drum could be re-greased, but the bearings in the brake are self lubricating. Much of the brake system is made of aluminium and stainless steel to minimise corrosion as these parts are critical for safety.

The generator and gearbox are mostly cast iron and require no particular attention, while the tower is largely galvanised and moderately corrosion resistant.

Importantly, watch for rusting in the weldments in the machine, notably the base hinge, the cable attachment points, the turntable, the tower cap, and any high tensile bolts in the machine as these cannot be galvanised.

A succession of coats of fish oil, cold galv paint and exterior enamel paint has been found a most successful rust preventative. Rust converter is useful if things have gotten that bad. If a winch is integral with the machine it is best greased and stowed away when not in use, to prevent theft, as well as corrosion. Grease rubbed into cables is an excellent preservative.

If your machine has wooden blades, then these may need repainting yearly, and perhaps sanding back after some years. Two part Estapol as a sealant is recommended. A top coat of paint will reduce ultraviolet degradation.

Particularly after the first few months of operation it is important to check the tension on all bolts as some parts may settle with use.